A discussion of the much publicised issues with the M96/M97 Carrera engines in the March 2015 GTPorsche magazine, by Peter Morgan

BORESCOPE CHECKS what can they really tell us?

What is bore scoring? Many engines contain a large number of components made from aluminium. Porsche use it for their cylinders and pistons. Although there are a number of benefits, one of the drawbacks is that is not a particularly durable metal. One way to overcome this is to coat the parts in a thin layer of harder material (such as Nikasil). The problems arise when this material wears away or becomes detached, allowing the piston rings to scrape away at the cylinder walls. Using a camera to assess the amount of wear is not always an accurate method – the cameras are generally of low quality and are looking into a pitch black environment. On an engine that has covered 60,000 miles the pistons will have travelled up and down the bores over 120 million times so even on a healthy engine there will inevitably be some wear evident and trying to ascertain whether this is acceptable is the hard part. Many engines have been stripped following a borescope only to find the wear was not as bad as the images suggested.

While cylinder bore scoring has been an issue on a relatively small percentage of Carrera engined 997S models and some 3.4 Boxster/Caymans, it isn't a universal problem. Factors that make it less likely include a good service history, a healthy cooling system (to reduce the chance of localised cylinder overheating during the warm up or over-run) and a usage that isn't inner city or predominantly short journeys (where the engine is always running with a rich mixture and excess fuel can dilute the oil). The 20K/2yr service intervals also haven't helped with engine life, as in such an urban environment a diluted oil doesn't get changed often.

The bottom line is that while we've seen perhaps 5% of the 2004-09 generation 1 cars we've inspected with the early warning signs of bore scoring, it isn't something you should avoid the model for.

It is usually the right side cylinder bank that most easily gets scored (the right hand bank of cylinders appears less well cooled than the left). Using a borescope requires the removal of the heat shields, coil packs and spark plugs. It is also necessary to turn the engine over by hand to get the pistons at the base of the bores. Turbo and generation 2 model 911’s also require removal of the rear bumper to gain access. As you can imagine, this isn't something that is very practical when we are working outdoors. As such, we do not offer a borescope as part of our inspection. This is down to a) a potential liability issue is anything goes wrong with the car subsequently (the owner isn’t paying for us to work on his car) and b) we do not have the facilities to make a repair should something break upon removal.

However, there are certain early warning signs of a potential scoring problem and if we see those we tell you to walk away. End of story. If the car is under a comprehensive warranty we usually also advise the owner to get a borescope check at a specialist workshop. The cost for this is usually around £150-250. We don't claim infallibility on spotting this issue, but we also err on the side of caution. It can be very difficult for anybody to spot if the seller knows how to conceal the signs.

A recording of a Porsche Carrera S (997 Gen 1) engine with scored cylinder bores.

Ensuring your car is the real deal

Fakery is unfortunately common and it can be quite easy to turn a popular lower specification car into a very good replica of a rare version. Most of the time this is done by enthusiasts wanting to get the look or capture some of the driving experience of a particular variant (just look at the number of back dated cars out there). However, there are fraudsters who make a living from selling such cars to unsuspecting buyers.

There are also the cars that have had their identity changed due to being damaged / reshelled or stolen. These cars do not always appear on the HPI register and there is a risk you could lose the car if it transpires it was stolen or has been cloned. Engine numbers are also important – a car without its original unit (ie not ‘matching numbers’) could be worth thousands less as a result.

We carry out a number of checks to ensure the authenticity of a car, not wishing to divulge exactly what we do, some of the more obvious fakes are shown below. 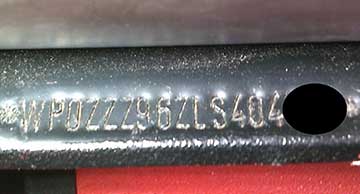 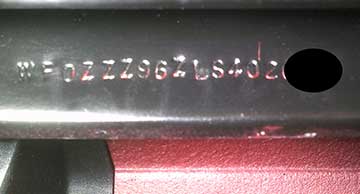 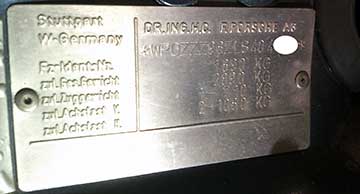 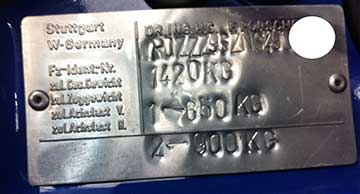 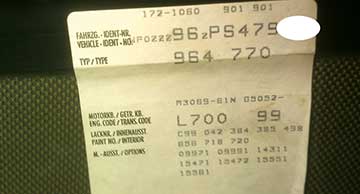 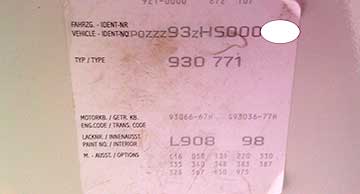 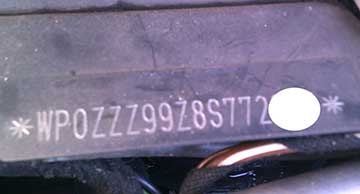 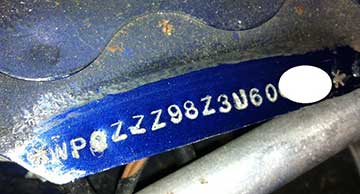 This is the oil seal at the end of the crankshaft (between the engine and gearbox) which can be prone to leaks. Porsche have redesigned this part many times and yet we still see cars that are leaking some oil. Another possible cause of a leak in this area is the IMS seal, which sits just below the RMS, it is only possible to know which seal has failed (and effect a repair) with the gearbox removed, although the seals themselves are cheap to buy, the labour costs to replace them can run into the hundreds (depending on model). Any leaks in this area are reported but often are not severe enough to warrant immediate replacement. With a minor leak, as long as the oil level and the leak are checked periodically a car could be driven indefinitely without issue, in fact many are only replaced when the box is removed for other work – such as a new clutch.

The IMS takes drive from the crankshaft, via a series of chains, to the camshafts. The bearing which locates the end of the shaft has been known to fail on certain cars (primarily 2001 to 2005 996 and Boxster models). IMS bearing failure can be sudden and often results in extensive and expensive engine work. Whilst it is not possible to measure any play in the bearing without major disassembly of the engine, there is some ECU data that can be checked. The camshaft data allows us see if there is any evidence of wear relating to the IMS bearing / cam chains and guides. Any figures shown out of expected parameters would be reported and advised accordingly. For complete peace of mind, a number of aftermarket bearing kits are available. It is worth noting that we are seeing fewer and fewer cars affected by this fault, it seems the majority of affected cars have either already been repaired or have upgraded parts fitted.

A car that has been driven with vigour (and remember, these are sports cars – this is common) will record some numbers in the lower ranges (at and just above the engine red line). If a driver has shifted into the wrong gear (as an example) and forced the revs up, beyond the limiter, this will record some numbers in the higher ranges. The amount of times this occured gives an insight into how ‘vigorously’ the car has been driven previously. If this has occurred a long time ago it is fair to assume that no damage was caused as a result. A cautious approach is required if this has happened recently as there is a risk that the engine may have been damaged – a Porsche dealer or specialist garage will often not honour a warranty if this is the case. It is therefore important to not only look at the number of times an over rev has occurred but also how long ago it happened. 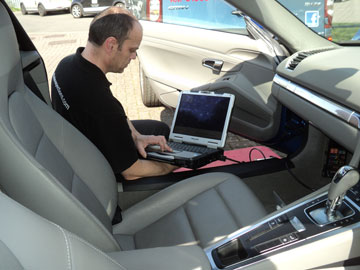 Some of the useful data it allows us to check

Our Porsche Integrated Workshop Information System affords us the same access and connectivity as the dealer network. This is primarily used on post 1998 cars and, as the later cars become more complex, more data is analysed. Not all models record the same level of detail but the following is a guide to what we can check (although this is not a conclusive list). 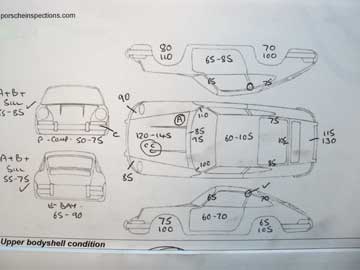 Quite a number of cars have received some new paint in the past, by using a paint thickness gauge we are able to ascertain if the paint is original. Where new paint has been applied, if this has been done to cover chips and scratches or whether there is filler hiding under the paintwork. Even if the paint is shiny there could be some repairs under the top coat. We provide a visual report on condition, previous repairs and corrosion. NOTE: it is not possible to measure the paint on plastic panels, such as bumpers.